Range finder with a Laser and a Webcam in Visual Basic 6.0

The author of this ingenious project is a scientist, namely Dr. Todd Danko. I found Dr. Danko to be connected with General Electric, Lockheed Martin and DARPA. Nice to have such people in the VB6 community. Like every VB6 programmer, it's fluent in C ++, Java and ASM. From here I will let his text explain the project.

There are many off the shelf range finding components available including ultrasonic, infrared, and even laser rangefinders. All of these devices work well, but in the field of aerial robotics, weight is a primary concern. It is desirable to get as much functionality out of each component that is added to an air-frame. Miniature robotic rotor craft for example can carry about 100g of payload. It is possible to perform machine vision tasks such as obstacle identification and avoidance though the use of a webcam (or mini wireless camera interfaced to a computer via USB adapter). Better yet, two webcams can provide stereo machine vision thus improving obstacle avoidance because depth can be determined. The drawback of this of course is the addition of the weight of a second camera. This page describes how a mini laser pointer can be configured along with a single camera to provide mono-machine vision with range information.

The diagram below shows how projecting a laser dot onto a target that is in the field of view of a camera, the distance to that target may be calculated. The math is very simple, so this technique works very well for machine vision applications that need to run quickly.

So, here is how it works. A laser-beam is projected onto an object in the field of view of a camera. This laser beam is ideally parallel to the optical axis of the camera. The dot from the laser is captured along with the rest of the scene by the camera. A simple algorithm is run over the image looking for the brightest pixels. Assuming that the laser is the brightest area of the scene (which seems to be true for my dollar store laser pointer indoors), the dots position in the image frame is known. Then we need to calculate the range to the object based on where along the y axis of the image this laser dot falls. The closer to the center of the image, the farther away the object is.

As we can see from the diagram earlier in this section, distance (D) may be calculated:

Of course, to solve this equation, you need to know h, which is a constant fixed as the distance between your laser pointer and camera, and theta. Theta is calculated:

Put the two above equations together, we get:

OK, so the number of pixels from the center of the focal plane that the laser dot appears can just be counted from the image. What about the other parameters in this equation? We need to perform a calibration to derive these.

To calibrate the system, we will collect a series of measurements where I know the range to the target, as well as the number of pixels the dot is from the center of the image each time. This data is below:


Using the following equation, we can calculate the actual angle based on the value of h as well as actual distance for each data point.

Now that we have a Theta_actual for each value, we can come up with a relationship that lets us calculate theta from the number of pixels from image center. I used a linear relationship (thus a gain and offset are needed). This seems to work well even though it does not account for the fact that the focal plane is a plane rather than curved at a constant radius around the center of the lens.

From my calibration data, I calculated:

I solved for calculated distances, as well as error from actual distance from the calibration data:


There are not a lot of parts in my sample range finder. I used a piece of cardboard to hold a laser pointer to a webcam so that the laser pointer points in a direction that is parallel to that of the camera. The parts seen below are laid out on a one inch grid for reference. 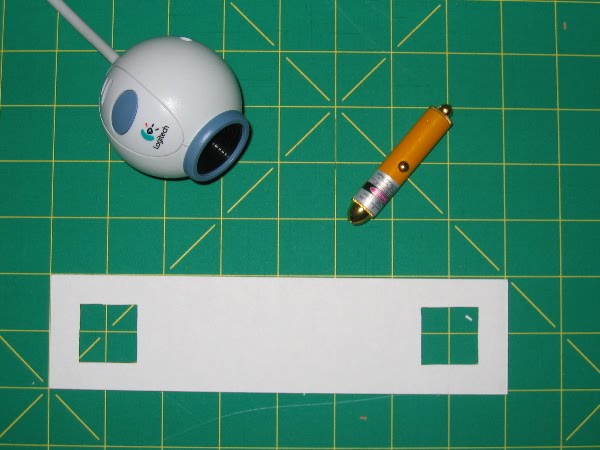 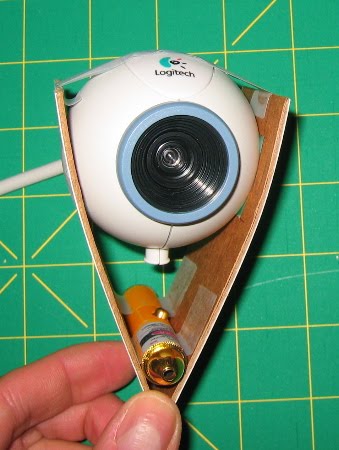 
I have written software two ways, one using visual c++ and the other using visual basic. You will probably find that the visual basic version of the software is much easier to follow than the vc++ code, but with everything, there is a tradeoff. The vc++ code can be put together for free (assuming that you have visual studio), while the vb code requires the purchase of a third party software package (also in addition to visual studio).

The visual basic code that I have written is available as a package named vb_laser_ranger.zip at the bottom of this page. For this code to work, you will need the VideoOCX ActiveX component installed on your computer. The code that describes the functions found in the main form is seen below:

Screen shots from this code can be seen below: 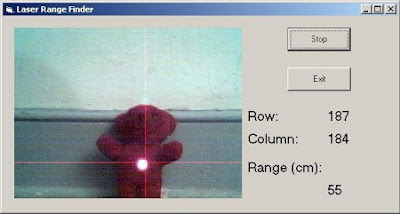 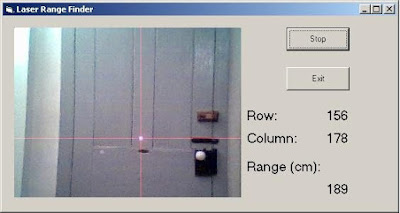 
My complete code for this project is available as a package named LaserRange.zip at the bottom of this page.  Note, to run this executable, you will need to have both qcsdk and the qc543 driver installed on your computer.  Sorry, but you are on your own to find both of these. Below are two examples of the webcam based laser range finder in action. Note how it looks like there are two laser dots in the second example. This "stray light" is caused by internal reflections in the camera. The reflected dot loses intensity as it bounces within the camera so it does not interfere with the algorithm that detects the brightest pixel in the image. 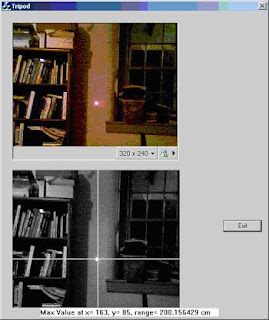 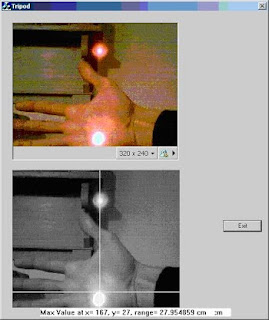 
One specific improvement that can be made to this webcam based laser range finder is to project a horizontal line rather than a dot onto a target. This way, we could calculate the range for each column of the image rather than just one column. Such a setup would be able to be used to locate areas of maximum range as places that a vehicle could steer towards. Likewise, areas of minimum range would be identified as obstacles to be avoided.

Here we have an application that measures execution times for the three sorting algorithms: Quick Sort, Selection Sort and Bubble Sort.  A visual interface shows what these algorithms do in real time. The implementation is made in algorithm in Visual Basic 6.0 and the source code is shown below:


The quicksort algorithm was developed in 1959 by Tony Hoare while in the Soviet Union, as a visiting student at Moscow State University. At that time, Hoare worked in a project on machine translation for the National Physical Laboratory. As a part of the translation process, he needed to sort the words of Russian sentences prior to looking them up in a Russian-English dictionary that was already sorted in alphabetic order on magnetic tape. After recognizing that his first idea, insertion sort, would be slow, he quickly came up with a new idea that was Quicksort. He wrote a program in Mercury Autocode for the partition but couldn't write the program to account for the list of unsorted segments. On return to England, he was asked to write code for Shellsort as part of his new job. Hoare mentioned to his boss that he knew of a faster algorithm and his boss bet sixpence that he didn't. His boss ultimately accepted that he had lost the bet. Later, Hoare learned about ALGOL and its ability to do recursion that enabled him to publish the code in Communications of the Association for Computing Machinery, the premier computer science journal of the time.

Quicksort gained widespread adoption, appearing, for example, in Unix as the default library sort subroutine. Hence, it lent its name to the C standard library subroutine qsort and in the reference implementation of Java.

Robert Sedgewick's Ph.D. thesis in 1975 is considered a milestone in the study of Quicksort where he resolved many open problems related to the analysis of various pivot selection schemes including Samplesort, adaptive partitioning by Van Emden as well as derivation of expected number of comparisons and swaps. Bentley and McIlroy incorporated various improvements for use in programming libraries, including a technique to deal with equal elements and a pivot scheme known as pseudomedian of nine, where a sample of nine elements is divided into groups of three and then the median of the three medians from three groups is chosen. Jon Bentley described another simpler and compact partitioning scheme in his book Programming Pearls that he attributed to Nico Lomuto. Later Bentley wrote that he used Hoare's version for years but never really understood it but Lomuto's version was simple enough to prove correct. Bentley described Quicksort as the "most beautiful code I had ever written" in the same essay. Lomuto's partition scheme was also popularized by the textbook Introduction to Algorithms although it is inferior to Hoare's scheme because it does three times more swaps on average and degrades to O(n2) runtime when all elements are equal.

In 2009, Vladimir Yaroslavskiy proposed the new dual pivot Quicksort implementation. In the Java core library mailing lists, he initiated a discussion claiming his new algorithm to be superior to the runtime library’s sorting method, which was at that time based on the widely used and carefully tuned variant of classic Quicksort by Bentley and McIlroy. Yaroslavskiy’s Quicksort has been chosen as the new default sorting algorithm in Oracle’s Java 7 runtime library after extensive empirical performance tests.

Selection sort is a sorting algorithm, specifically an in-place comparison sort. It has O(n2) time complexity, making it inefficient on large lists, and generally performs worse than the similar insertion sort. Selection sort is noted for its simplicity, and it has performance advantages over more complicated algorithms in certain situations, particularly where auxiliary memory is limited.

The algorithm divides the input list into two parts: the sublist of items already sorted, which is built up from left to right at the front (left) of the list, and the sublist of items remaining to be sorted that occupy the rest of the list. Initially, the sorted sublist is empty and the unsorted sublist is the entire input list. The algorithm proceeds by finding the smallest (or largest, depending on sorting order) element in the unsorted sublist, exchanging (swapping) it with the leftmost unsorted element (putting it in sorted order), and moving the sublist boundaries one element to the right.

Bubble sort, sometimes referred to as sinking sort, is a simple sorting algorithm that repeatedly steps through the list to be sorted, compares each pair of adjacent items and swaps them if they are in the wrong order. The pass through the list is repeated until no swaps are needed, which indicates that the list is sorted. The algorithm, which is a comparison sort, is named for the way smaller or larger elements "bubble" to the top of the list. Although the algorithm is simple, it is too slow and impractical for most problems even when compared to insertion sort. It can be practical if the input is usually in sorted order but may occasionally have some out-of-order elements nearly in position.