Here is why I love vb6 and wont give it up. Its a simple clean light weight language. The IDE starts up like a flash, as do debug sessions. Compiled executables are native and give good performance. They can not be decompiled and are not defacto open source. The language has not been academically abstracted away into hundreds of classes and does not require long drawn out lines of code to access object after object to complete a single task. When debugging, I can set a breakpoint and edit just about anything without a debugger reset. Including code in other functions. The message pump on the form continues to run at breakpoints so I can see output. VB6 was created by pretty much gods of Windows programming. They made super hard stuff trivially easy and did it with class. VB6 also integrates nicely with standard C and beautifully with COM. If I cant do something easily in vb6, I just switch gears, do it in C then integrate the two. I write research tools and use vb6 everyday. I am grateful that I am still using code written over a decade ago. I use C# now and again if there is a library for it that will save me allot of time, but mostly it sits on the side. I want raw access to memory and data structures without any extra layers in between. I dont want to accept all those extra startup delays every debug session or application startup. Regardless of OS, I need vb6 as a tool to do the types of processing my job entails. It lets me have more tools in less time with less typing and is perfectly capable of performing the tasks I require of it. I like the balance they struck between light weight, speed, and quick development. .Net attributes are not as suitable for my tasks. 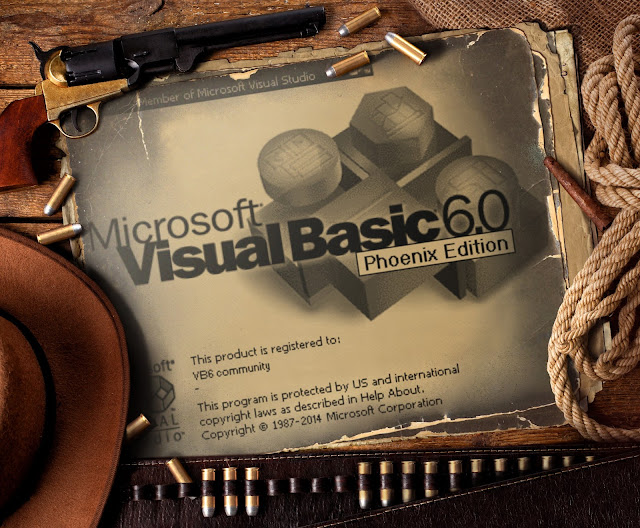 Like the BASIC programming language, Visual Basic was designed to accommodate a steep learning curve. Programmers can create both simple and complex GUI applications. Programming in VB is a combination of visually arranging components or controls on a form, specifying attributes and actions for those components, and writing additional lines of code for more functionality. Since VB defines default attributes and actions for the components, a programmer can develop a simple program without writing much code. Programs built with earlier versions suffered performance problems, but faster computers and native code compilation has made this less of an issue.
Though VB programs can be compiled into native code executables from version 5 on, they still require the presence of around 1 MB of runtime libraries. Runtime libraries are included by default in Windows 2000 and later. Earlier versions of Windows (95/98/NT), require that the runtime libraries be distributed with the executable. An empty form in Visual Basic 6.
Forms are created using drag-and-drop techniques. A tool is used to place controls (e.g., text boxes, buttons, etc.) on the form (window). Controls have attributes and event handlers associated with them. Default values are provided when the control is created, but may be changed by the programmer. Many attribute values can be modified during run time based on user actions or changes in the environment, providing a dynamic application. For example, code can be inserted into the form resize event handler to reposition a control so that it remains centered on the form, expands to fill up the form, etc. By inserting code into the event handler for a keypress in a text box, the program can automatically translate the case of the text being entered, or even prevent certain characters from being inserted.
Visual Basic can create executables (EXE files), ActiveX controls, or DLL files, but is primarily used to develop Windows applications and to interface database systems. Dialog boxes with less functionality can be used to provide pop-up capabilities. Controls provide the basic functionality of the application, while programmers can insert additional logic within the appropriate event handlers.
For example, a drop-down combination box automatically displays a list. When the user selects an element, an event handler is called that executes code that the programmer created to perform the action for that list item.
Alternatively, a Visual Basic component can have no user interface, and instead provide ActiveX objects to other programs via Component Object Model (COM). This allows forserver-side processing or an add-in module.
The runtime recovers unused memory using reference counting, which depends on variables passing out of scope or being set to Nothing, avoiding the problem of memory leakscommon to other languages. There is a large library of utility objects, and the language provides basic object oriented support. Unlike many other programming languages, Visual Basic is generally not case sensitive—though it transforms keywords into a standard case configuration and forces the case of variable names to conform to the case of the entry in the symbol table. String comparisons are case sensitive by default.
The Visual Basic compiler is shared with other Visual Studio languages (C, C++). Nevertheless, by default the restrictions in the IDE do not allow creation of some targets (Windows model DLLs) and threading models, but over the years, developers have bypassed these restrictions.

The code windows in Visual Basic, showing a Function using the If, Then, Else and Dim statements.
The following Visual Basic traits differ from C-derived languages:

OPTION BASE was introduced by ANSI, with the standard for ANSI Minimal BASIC in the late 1970s.

Alan Cooper created the drag and drop design for the user interface of Visual Basic.
VB 1.0 was introduced in 1991. The drag and drop design for creating the user interface is derived from a prototype form generator developed by Alan Cooper and his company called Tripod.[citation needed][discuss] Microsoft contracted with Cooper and his associates to develop Tripod into a programmable form system for Windows 3.0, under the code name Ruby (no relation to the later Ruby programming language).
Tripod did not include a programming language at all. Microsoft decided to combine Ruby with the Basic language to create Visual Basic.
The Ruby interface generator provided the "visual" part of Visual Basic and this was combined with the "EB" Embedded BASIC engine designed for Microsoft's abandoned "Omega" database system. Ruby also provided the ability to load dynamic link libraries containing additional controls (then called "gizmos"), which later became the VBX interface.[18]

Microsoft has developed derivatives of Visual Basic for use in scripting. Visual Basic itself is derived heavily from BASIC, and subsequently has been replaced with a .NETplatform version.
Some of the derived languages are:

Performance and other issues[edit]

Earlier versions of Visual Basic (prior to version 5) compiled the code to P-Code only. The P-Code is interpreted by the language runtime. The benefits of P-Code include portability and smaller binary file sizes, but it usually slows down the execution, since having a runtime adds an additional layer of interpretation.
Visual Basic applications require Microsoft Visual Basic runtime MSVBVMxx.DLL, where xx is the relevant version number, either 50 or 60. MSVBVM60.dll comes as standard with Windows in all editions after Windows 98 while MSVBVM50.dll comes with all editions after Windows 95. A Windows 95 machine would however require inclusion with the installer of whichever dll was needed by the program.
Visual Basic 5 and 6 can compile code to either native or P-Code but in either case the runtime is still required for built in functions and forms management.
Criticisms levelled at Visual Basic editions prior to VB.NET include:[30]

The following code snippet displays a message box saying "Hello, World!" as the window loads:
This snippet makes a counter that moves up 1 every second (a label and a timer control need to be added to the form for this to work):